Babies begin communicating from the time they leave the womb. Slowly they learn the language that will let them express themselves and interact with the people around them. The step-by-step development of language is described beginning in Stages of growth.

Parents may worry about how well their child is learning language. Before worrying, remember that children learn at different speeds. Some are slow to speak, others are quick. Temperaments are different too: some children are quieter, others like to talk.

In this section, we will try to answer the most common questions from parents about language. 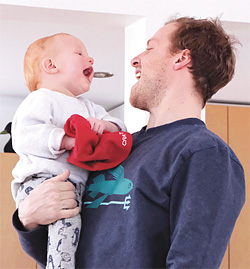 It’s best to be at the same level as your child so he can see your face when you speak.

How should I speak to my child?

Use simple words and short sentences that are not much longer than your child’s. Speak more slowly and repeat what you say often. Your child will no doubt come up with words like “wawa” for water, “woof-woof” for dog, and “banket” for blanket. Help him learn the right words. When he says “wawa,” offer “Yes, water.”

You can also use words and sentences to describe what you and your child are doing. As he grows, you will naturally adapt to his level.

He doesn’t talk; what do I do?

It’s important not to pressure your child. Keep your interaction enjoyable. Try these strategies to get him to express himself:

I don’t understand what he’s saying; what do I do?

Without blaming him, tell him that you don’t understand.

It’s important to encourage all his attempts to communicate, even if you don’t understand. If you understand a few words, try to ask about the rest of the sentence: “Something happened to your teddy bear?” If you have no idea, ask him to show you.

His pronunciation is wrong; what do I do?

When a child learns to speak, some sounds come early, like p, b, m, t, d and n, while others develop later. Children should be able to correctly pronounce the sounds f, v, k, g, h, s, and z by age 3 or 3 1/2. The l sound can usually be articulated by age 4. Mastery of the sounds ch, j, and r may not come until age 5, and the th sound usually comes at about age 6.

The sh and j sounds appear at around 3 ½ years and may be learned at only 7 years in some children – no reason to worry before then. Many children replace sh with s and z (e.g.: shoe ➔ soe, jam ➔ zam).

To help your child learn to say sounds correctly, repeat the words in the right way, emphasizing the sound he mispronounced. For example, if he says “woud” for “loud,” help him by stretching the correct sound and saying it louder: “LLLLLLoud.” Don’t force him to repeat the word. Indirectly encourage him by asking follow-up questions.

When to consult a health professional

Some aspects of learning to speak and communicate are very important. We encourage you to ask for advice from a health professional if:

At about 6 months, your child does not react to your voice or noise. He doesn’t babble and doesn’t smile.

At about 12 months, he stops making sounds. He doesn’t react to familiar words, like his name and the names of people close to him, his teddy bear and favourite games. Your child doesn’t look you in the eye, and doesn’t seem interested in communicating through gestures or sounds.

At about 18 months, he isn’t using any words. He doesn’t point. He doesn’t understand simple and familiar instructions, such as “give” or “come here.”

At about 24 months, he doesn’t combine two words, and expresses himself mainly with gestures. He doesn’t imitate sounds or words. He says less than 100 words.

Some situations can increase the risk of language problems. You should talk to a health professional about such situations, which are listed below. Together, you will be able to decide if a special consultation is required:

Should he see a speech-language pathologist?

Language is essential to your child’s growth and ability to communicate. When he gets to school, he will need to be able to express himself and be understood. If you notice that he has specific troubles, it would be worthwhile to see a speech-language pathologist. Your doctor can help you find one.

The local CLSC, hospital or rehabilitation centre might offer such services. Schools also offer support, but it’s better to help your child before he gets to kindergarten. Waiting times for seeing a speech-language pathologist lead some parents to pay for one through the private sector.

A complete list of speech-language pathologists and audiologists in your region is available through the Ordre des orthophonistes et audiologistes du Québec.
514-282-9123 / 1-888-232-9123
www.ooaq.qc.ca (in French only)