Before handling expressed milk, make sure your hands, breast pump and accessories are clean.

Breast milk is best when fresh and taken directly from the breast, but it refrigerates and freezes well, too. If you only feed expressed breast milk to your baby, it’s preferable to use freshly expressed or refrigerated milk. Prolonged freezing slightly reduces the nutritional value of breast milk. However, it’s still better than any other milk.

Breast milk can be kept in glass or hard plastic containers or even in special, thicker baby bottle liners designed for breast milk. Baby bottle liners for commercial formulas are too thin and don’t freeze as well. They need to be doubled up because they are too fragile.

Milk that has just been expressed or taken out of the refrigerator can be kept at room temperature for up to 4 hours. If it will be used later than that, keep it in the refrigerator. If you don’t plan to use it within 8 days, freeze it as soon as possible. You can put it straight in the freezer after expressing it. Here are a few tips:

If the fresh, refrigerated or thawed milk has been warmed up but your baby changes her mind, you don’t need to discard it unless it has been in contact with bacteria from your baby’s mouth. You can keep it in the refrigerator for 4 hours or more. Use it for the next feeding; otherwise you’ll need to throw it out.

Information on thawing milk can be found under Warming milk.

Storage times can’t be added together. For example, you can’t keep milk for 4 hours at room temperature, then put it in the refrigerator or freeze it.

*The freezer temperature must be cold enough to keep ice cream hard (-18°C or 0°F). 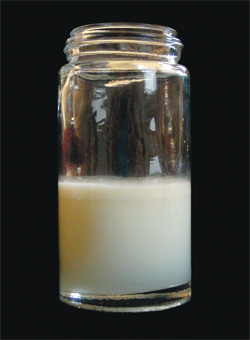 Expressed breast milk separates after a while and the cream floats to the surface. Don’t throw it out—it’s still good! The amount of cream varies from one time to the next and from one mother to another.

Expressed breast milk doesn’t look like cow’s milk or commercial infant formula. Since it’s not homogenized, it separates after a while and the cream floats to the surface. Warm milk just needs a shake to mix it together again.

Human milk can have a whitish, bluish, yellowish or brownish tinge. The colour and smell of breast milk can vary

The smell and taste of some mother’s milk changes when the milk is refrigerated or frozen. This is caused by lipase, an enzyme that helps babies digest fats. The digestive process can begin while the milk is still in its container. Don’t worry—it’s still good for your baby.

Some babies don’t like the taste of refrigerated or frozen milk and refuse to drink it. Sometimes you can solve the problem by freezing your milk without refrigerating it first.

If that doesn’t work, try

This will deactivate the lipase.