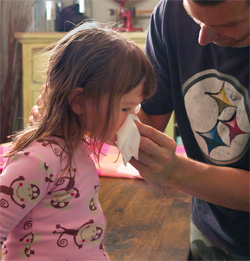 If your child has a nosebleed, have him sit down and lean his head forward slightly, pinch his nostrils, and maintain pressure for about 10 minutes.

Nosebleeds are rare in babies, but common in older children.

Bleeding often occurs when the nose is irritated after a cold or when a child has put a finger or object in a nostril. Nosebleeds are generally harmless.

If your child is bleeding from the nose, follow these steps: