All children need limits. As parents, you respond to this need according to your values but also taking into consideration your child’s character, age, and physical and emotional needs. It is important for him that the rules in your family be simple and clear.

Individual parents have their own style of educating their children, probably learned from their own parents; they can be adapted to today’s realities. Some are more permissive, others more strict. The most important thing is to trust your instincts and respect your child.

Love also means setting rules. Rules exist to help keep your child from getting hurt, from hurting others and to teach him to respect others and the world around him. He needs rules and limits, but since he doesn’t know what they are, he needs you to teach him.

We usually begin to teach a child rules when he starts to move around on his own with ease; in most cases, that’s at about 9 months. From that age on he’s able to learn simple rules.

Your little one will follow a rule if you explain it to him taking into account his age and his ability to understand and remember what you are asking him. Teach him one rule at a time and go on to the next only when the last one has been well integrated into his day-to-day routine.

At the age of 18 months, take time to explain the “why” of a rule. Use clear, simple, descriptive language that shows him exactly what you expect from him. This will make it easier for him to understand, accept and respect this rule.

Learn to say NO 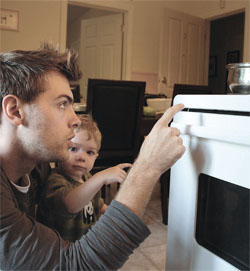 Be consistent: when you say no, stick to your word. For example, if you’ve just told your child he’s not allowed to touch the oven door, but he tries to do it anyway, you should say NO firmly.

You can then move him away from the door and offer him a toy as a distraction. If he starts playing with it, praise him. If he cries, repeat no softly, taking care to reassure him. If he is old enough to understand, explain why this is not allowed. If he gets up and returns toward the oven door, simply say no once again and repeat the process. Usually it takes several times, so don’t be too discouraged.

From the time your baby was born, you’ve created a strong emotional bond with him. This will help you a lot when it comes to setting rules. A child who feels loved, understood and respected will be much easier to guide than one who doesn’t feel appreciated.

Discipline exists first to keep little ones physically and emotionally safe. It also makes living with others possible – for your child today and in the future. For discipline to work, both parents must decide together what is and isn’t allowed. That way, you can set clear rules without contradicting each other.

Some children need more structure than others. As parents, you are in the best position to judge your child’s specific needs and personality.

This means preventing behaviour that could be dangerous for your child and that could result in him being hurt. For example, you don’t allow him to climb something that’s not stable. You can make discipline easier by not having too many unsafe things around – make your house safe.

A routine for emotional well-being

Your child needs a routine. He likes things to happen in about the same order each time. That way he can learn to predict what’s happening and how it will affect him.

He will feel reassured if meals, bedtime and leaving for daycare follow a predictable routine. Having a routine also keeps you from having to repeat rules and instructions.

Rules that teach cleanliness and politeness

You can teach your child to eat with a spoon, put objects away, use the potty and brush his teeth morning and night. You can also teach him some basic rules that will make his life in the outside world easier later on: 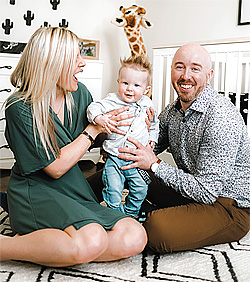 Don’t hesitate to acknowledge your child’s good behaviour and to congratulate him on it.

Help your child learn good behaviour through the rules you set by congratulating more than scolding. Put more time and energy into encouraging than arguing. Work to guide him toward acceptable and good behaviour. The results will be much better than constantly having to reprimand.

A child that is given too many instructions and scolded too often is likely to become upset or discouraged.

Recognize and congratulate your child’s good actions. This will teach him about your expectations and reassure him about his skills and abilities. A child’s self-esteem grows through his daily experiences; this is how he develops a positive image of himself.

The challenge for parents is to balance encouragement and correction.

By around 12 months, you can start teaching your child that he can wait a few minutes before getting what he needs. This will help him learn to be patient little by little in daily situations, for example, while you’re making supper, taking care of another child or answering an important phone call.

Be sure to be reassuring during these first waiting periods. Keep talking with him, saying for example, “Mommy’s on the phone; I’ll be with you in two minutes,” or offer him a toy.

During this infamous time of no-no-no, which is usually between about 18 months and 3 years, children experience the need to go against anything asked of them. They are in fact going through their first assertiveness crisis. They are testing what they’ve learned and learning more.

Little by little, they understand that not everything is allowed, that there are consequences to our actions, and that rules and limits are part of living with others. Avoid confrontations. It’s a good idea to offer choices within limits that are acceptable to you. This will satisfy his need for independence. For example, if the child has to put away his toys, ask if he would like to pick up the blue blocks or the red blocks first.

Your job of parent isn’t easy. But it’s crucial. The sooner your child learns the rules of the house, the easier and more enjoyable it will be to live with him. You’ll have more time to do interesting things together. It will also be easier for him to accept rules in other situations, like at daycare. Your household rules get him ready for life outside home, where the rules will be similar to yours.

When the rule is essential to your child’s well-being, such as bedtime, don’t hesitate to keep your word. Be persistent without being aggressive. Try not to repeat instructions without follow-through. If there are no consequences, your child will learn he doesn’t have to follow directions.

If your child refuses to follow a rule you’ve taken care to explain, you must be firm. It will show in your face and the tone of your voice. Don’t hit your child. It will only teach him to be afraid, to be disrespectful and to be aggressive. It will teach him to hit to get what he wants, because that’s the model you’ll be showing. There are more effective ways.

Firm means clear and consistent. Some children need more rules and supervision than others. As parents, you are in the best position to adapt to the needs and character of your little one.

Look at a common example: the grocery store crisis. Your little angel throws a devil’s fit because you won’t give him the candy he sees. He cries, kicks and screams. He even tries to hurt you and rolls on the floor. Obviously, everyone is now watching, some who understand, others who don’t.

Withdrawal - In this kind of situation, a good trick is to say “enough!” with a firm tone and get your child out of the situation. Once away and at a distance from spectators, explain calmly but firmly to your child that you will not continue getting the groceries until he understands that he will not be getting any candy. This kind of radical change in the situation should surprise him and get him to change his mind.

Wait for the calm to return before going back to get your groceries. It may seem that you’re wasting time, but the limits you’re setting with your child are essential and will save you time in the months ahead.

This approach – called withdrawal – means you remove your child from a difficult situation for several minutes to explain what you expect of him. It’s better than punishment, which often leaves the child not understanding why he’s being scolded or what’s expected of him.

Love, respect, flexibility, patience and persistence are the qualities you have that will allow you to raise your children well.

Parents need to work together to create healthy discipline. The daily and necessary efforts you make are an investment in the future. By gradually teaching your child the rules of life as a family and as a society, you are making him able to follow the rules on his own later in life.

Many books are available in stores or libraries if you would like to read more about discipline.