Your baby is constantly growing and must go through several stages before he’s ready to live outside the uterus. These stages, or key moments, are outlined below. The number of weeks associated with each stage (based on last menstrual period) is only an approximation and may differ from one woman to the next.

First trimester: from conception to 14 weeks

At 5 weeks, the embryo’s heart begins to beat, although it cannot yet be heard during a medical exam.

At 6 weeks, the embryo measures 5 mm. 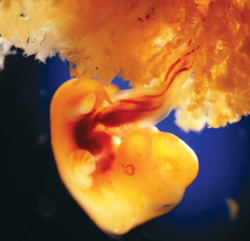 Embryo at 40 days (7 weeks after the first day of the last menstrual period).

At 7 weeks, the embryo’s head is much bigger than the rest of its body. Its arms begin to form as the elbows and hands appear. The fingers are still fused together. The eyes are now quite visible.

At 10 weeks, the embryo already has a human appearance: its eyes, nose, and mouth are recognizable. Its eyelids are closed. The fingers have now separated and the toes are beginning to form. Your baby begins to move his limbs, but you won’t feel any movement yet.

He has now progressed from embryo to fetus: all the body parts are in place, but are not yet fully formed. They will continue to grow and develop throughout the pregnancy. 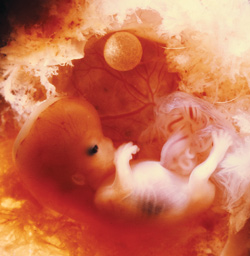 Fetus at the end of the first trimester.

Between 10 and 14 weeks, the fetus gets bigger and the skeletal bones begin to form.

At 14 weeks, the fetus measures around 8.5 cm. Your baby’s genitals, while not yet fully formed, are developed enough to reveal whether it’s a boy or a girl. Usually you can find out the sex of your baby between 16 and 18 weeks when an ultrasound is performed. 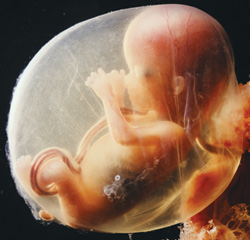 Fetus at the beginning of the second trimester.

At 16 weeks, the baby’s head is still disproportionately large compared to the rest of his body, but his trunk, arms, and legs are beginning to lengthen.

Around 20 weeks, your uterus is level with your belly button. Your baby’s movements are now strong enough that you can feel them. Some women feel these movements a little earlier or a little later in their pregnancy. Your baby is coated in a whitish cream known as vernix caseosa, which protects his skin.

At 22 weeks, your baby measures around 19 cm. His hair begins to grow, and his body is covered in a fine downy fuzz known as lanugo. 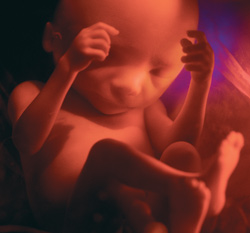 Fetus at the end of the second trimester.

Between 23 and 27 weeks, your baby puts on weight and his head becomes better proportioned to his body.

At 24 weeks, he can hear low frequency sounds from outside the uterus.

Around 26 weeks, his eyebrows and eyelashes are visible.

Around 28 weeks, your baby’s eyes begin to open. They will become sensitive to light at around 32 weeks.

Third trimester: from 29 weeks to birth 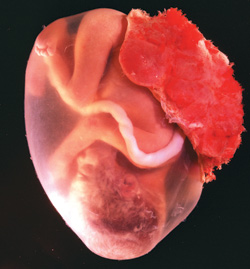 Fetus at the end of the third trimester.

At 36 weeks, your baby’s skin is pinkish, and the downy hair on his body begins to disappear, although it can remain until after the birth. Your baby is bigger because of the fat reserves he is building up.

Embryo: Name given during the first full 10 weeks of pregnancy to the human being developing in the mother’s abdomen.

Fetus: Developmental stage of a human being in its mother’s womb, from 10 weeks of pregnancy until birth.

Ultrasound: An examination using an ultrasound device that can see the embryo or fetus in the mother’s womb.

Vernix caseosa: A whitish substance coating the skin of a newborn baby.