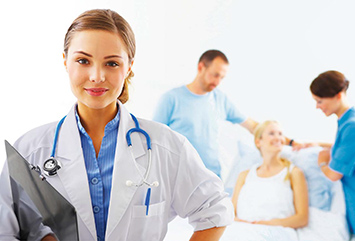 * When the incidence rate is 0, the confidence interval [CI] is not calculated.
** The “Other” column also includes HD-related BSIs and secondary BSIs arising from a skin, soft tissue, bone or joint infection.

The BSI incidence rate in 2013-2014 decreased significantly compared with the 2009-2013 pooled rate (p = 0.05, Table 3). This results from the significant decrease observed in teaching facilities (p < 0.01), while incidence rates remained stable in non-teaching facilities. This downward trend was observed for every BSI type except for non-CRBSIs and BSIs secondary to a SSI (Figure 4). Observed variations were significant for CRBSI (p < 0.01), non-CRBSI (p < 0.01) and BSIs secondary to abdominal (p = 0.04) or pulmonary infections (p < 0.01).

Patients who developed a BSI were aged between 0 and 101 years, with a median age of 68 years. Although the incidence rates were higher in ICUs, most of the BSIs occurred in non-ICU units (70%, Table 4 and Figure 5). CRBSIs were the most commonly encountered BSIs in ICUs, whereas BSIs secondary to urinary tract infections were the most common in non-ICU units. Similarly, CRBSIs were the most frequent type of BSI in teaching facilities, whereas BSIs originating from a urinary tract infection ranked first among non-teaching facilities (Table 4 and Figure 6). 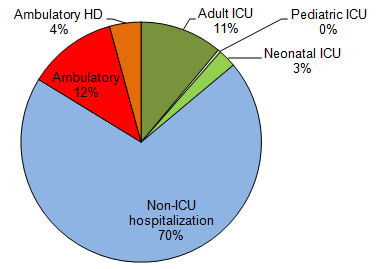 Figure 6 – Breakdown of Cases Based on Type of BSI, for Teaching and Non-Teaching Healthcare Facilities, Québec, 2013-2014 (%)

Overall, 17% of BSI cases resulted in death within 30 days of bacteremia onset (Table 5). Case fatality was highest in patients with a BSI secondary to a pulmonary infection (Table 5 and Figure 7). 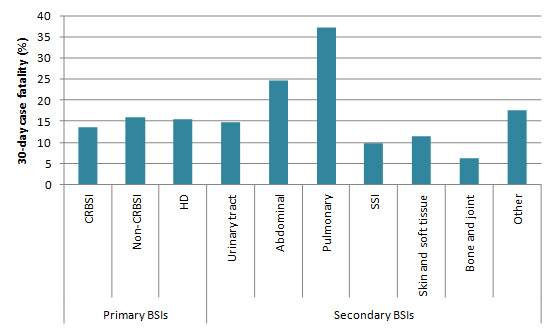 The two most frequently isolated microorganisms in reported cases and in cases resulting in death within 30 days were Staphylococcus aureus and Escherichia coli (Figure 8 and Table 6). Staphylococcus aureus was the most frequently isolated microorganism in patients with a CRBSI, a dialysis-related BSI and in BSIs secondary to a SSI (Figure 9 and Table 6). In patients with a non-CRBSI or a BSI secondary to a urinary tract, pulmonary or abdominal infection, Enterobacteriaceae were the most common microorganisms. In cases of hemodialysis and BSIs secondary to a pulmonary infection or an SSI, S. aureus ranked first. A polymicrobial infection occurred in 7% of cases. 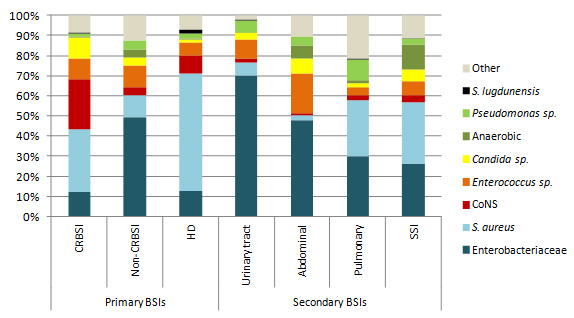 Table 6 – Breakdown of Microorganisms associated with BSIs, for each Type of BSI, for all BSIs and for those associated with a Fatality Within 30 Days, Québec, 2013-2014 (N, %)

* This column includes the sum of the other columns as well as secondary BSIs arising from a skin, soft tissue, bone or joint infection, or another source.

Methicillin-resistant S. aureus (MRSA) accounted for 17% (101/602) of S. aureus BSIs in all geographic areas. This proportion has been decreasing on a fairly constant basis since 2009 (Table 7 and Figure 10). Resistance to vancomycin was relatively stable in Enterococcus faecium and E. faecalis BSIs (5%), compared to 2009-2013. BSIs associated with carbapenem-resistant enterobacteriaceae continued to be relatively rare in Québec. 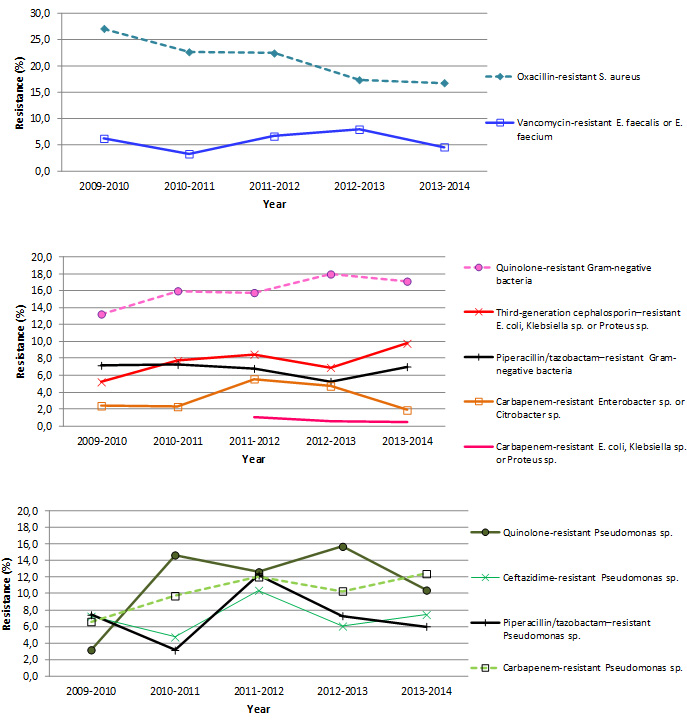